Barry Marsden Named a Member of the Order of Canada 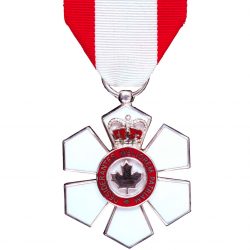 Barry Marsden, Chairman, was named as one of the new appointments as a Member of the Order of Canada, for his contributions to the growth of Canada’s aviation industry, both with Conair and as the founder of Cascade Aerospace.

The news of Barry’s appointment came as a total shock to him. “I’m very honoured to have been selected and it is certainly humbling. When I was informed, I kept thinking, ‘You’ve gone to the wrong person. This doesn’t seem right to me.’ It was just stunning, overwhelming.”

Recipients will be invited to accept their insignia at a ceremony to be held at a later date, usually anywhere within two to twelve months. There are three or four investitures held each year, either at Rideau Hall in Ottawa or at La Citadelle in Quebec City. If the recipient cannot travel, efforts are made to arrange a private ceremony.

The Order of Canada, one of the country’s highest civilian honours, was established in 1967, Canada’s centennial year, to recognize outstanding lifetime achievement, dedication to the community and service to the nation. Over the last 45 years, more than 6,000 people from all sectors of society have been invested into the Order.

There are three levels in the Order:

The Order of Canada Nomination Process:

The Chancellery of Honours does independent research on each nomination it receives, including consulting peers, colleagues and members of the Order of Canada. The Advisory Council meets twice a year to consider the nominations (about 400 to 600 a year). Once the Governor General is informed of the Advisory Council’s recommendations, the Chancellery contacts the individuals to get their acceptance.